The Yunus Social Business Centre University of Florence (YSBCUF) is the first centre in Italy accredited by the Yunus Centre in Dhaka, founded by Nobel Peace Prize laureate Prof. Muhammad Yunus. The Centre was born in 2011 thanks to a partnership between the University of Florence, PIN S.c.r.l. – Servizi Didattici e Scientifici per l’Università di Firenze and the Yunus Centre in Dhaka. It is based at “Polo Universitario Città di Prato” and it is the result of the research and consulting job carried on in these years by ARCO (Action Research for CO-development).

The centre works in order to spread the theories of Social Business and offers strategic support to private individuals and Institutions who want to set up Social Business both in Italy and abroad. The centre also acts as intermediary with the Yunus Centre in Dhaka and Italian subjects who want to be in contact with Prof. Yunus

The YSBCUF acts as a Social Business. Any profit is re-invested in the activities of the YSBCUF to promote and support the creation of Social Businesses in Italy and in the world.

Prof. Nicolò Bellanca, Professor of Economics of Development at University of Florence;

Prof. Mauro Lombardi, Professor of Economics of Innovation at University of Florence.

What is Social Business?

A social business is a non-loss, non-dividend company designed to address a social problem. The profits are used to expand the company’s reach and improve the product/service.

Professor Yunus wrote the seven principles that every Social Business must follow: 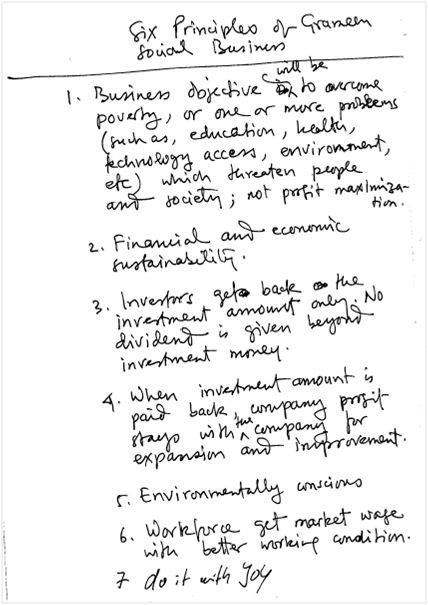 "The missing link in capitalism"

Dr. Muhammad Yunus, founder and managing director of Grameen Bank and Nobel Peace Prize laureate, has been instrumental in lifting people worldwide out of poverty. He did it with the pioneering use of microcredit – supporting income generating activities by lending small amounts without collateral to the poor.

Promoter of the idea of social business, a non-loss, non-dividend company with a social objective , Dr. Yunus has founded several companies in Bangladesh to abate poverty and aid development, including mobile phone services, energy, education and health care.

Together with Grameen Bank, Dr. Yunus was awarded the 2006 Nobel Peace Prize for his efforts to create economic and social development .

He is the author of the best-selling books “Banker to the Poor” ,“Creating a World Without Poverty: Social Business and the Future of Capitalism” in 2008 and “A world of three zeros” in 2017.  Most recently President Barack Obama decorated him with the Presidential Medal of Freedom, the highest civilian award in the USA.

Get your social business started 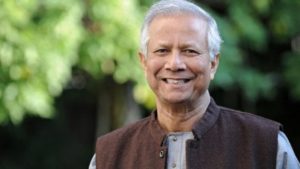